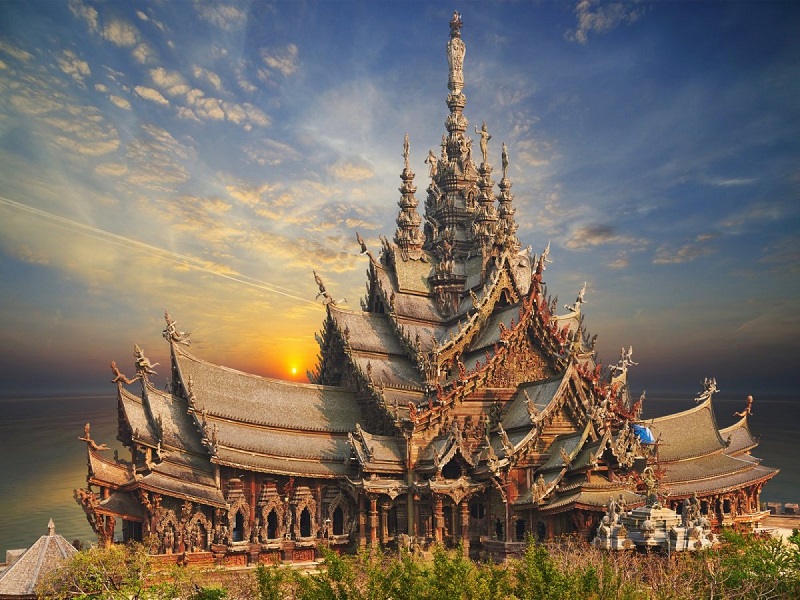 Tourists going on vacation to Thailand, particularly to Pattaya, know that this place is considered to be the main spot for entertainment. Some may get the impression that this atmosphere of the festival transcends all borders. But this is far from being the case: the country is quite puritan, and the native Thais are people of rather strict rules that adhere to centuries-old traditions. A number of aspects are not common to their culture, such as, for example, intimate relationships before marriage.

Contents
The history
The price
How to get there

Religion here is one of such ancient traditions and almost every resident of the country professes the culture of Buddhism. On weekends, most of the population is in a hurry to visit a temple and present their offerings to Buddha.
The ancient temples of Pattaya, some of which are still active monasteries, attract tourists like a magnet. And although there are fewer such ancient sights in Pattaya in comparison to Bangkok, there is much to see here.

It is very important to remember that the sanctuaries of Thailand are not tourist attractions. When visiting these places, it is required to respect the dress-code as well the codes of conduct. 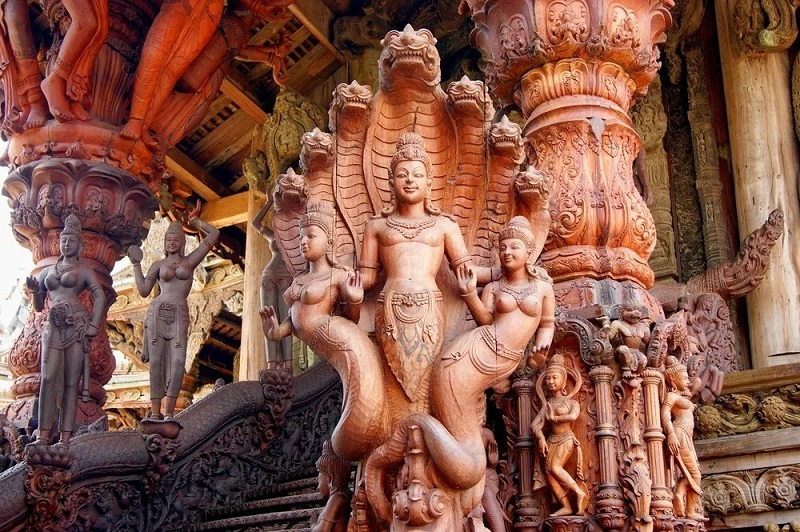 One of the most picturesque, colorful and popular with tourists as well as the largest and most significant in the city, is the Sanctuary of Truth in Pattaya. It is also known under the names of the Temple of Truth, Wang Boran and Prasat Mai.

The Sanctuary of Truth in Pattaya is one of the "youngest" large temples in Thailand. It was initially built not as an operating religious unit, but as a cultural attraction.
Work on it started in 1981 and is still ongoing, completion is planned for 2025. The author of the idea and the main sponsor of the construction of the complex is the Thai millionaire Lek Veriyafant.

The temple is being built, first of all, to familiarize tourists with the culture and traditions of Thailand, the rich architectural and religious heritage. The main feature of it is that it is a temple entirely wooden temple, built without a single mahogany screw. At present, pins and self-tapping screws are used there, but they all will be removed before the end of the construction process. The main building has been built some time ago. Nowadays, indoor and outdoor finishing work is actively underway. Each piece, even the smallest one, is carved by craftsmen manually.

The height of the main building reaches 108 meters, and its width is 100 meters; a total area of 13 hectares was allocated for the complex.
In architecture, the styles that have long been inherent in peoples of the same culture — Cambodian Khmers, Thais, Chinese, and Indians — come together naturally. The whole building boasts of a multitude of ornaments, visualizations of sacred animals and of Gods.

The patterns demonstrate features of the ancient culture to the world and reflect the essence and spirit of Eastern philosophy. In some of them, the plots of ancient legends and narratives can be spotted. The main thread that runs through the entire concept of the Sanctuary of Truth in Pattaya is the legend that the world rests on the seven cornerstone principles - Earth, Sky, Sun, Moon, Stars, Father and Mother.

The price for visiting the Sanctuary of Truth in Pattaya for an adult is 500 baht, and it is free for children up to 110 cm tall. For children with a height between 110 and 140 cm, the entrance fee is 250 baht. Joint tickets are available for tourists, which include riding on elephants or horses, riding on a boat or foot massage, as well as many other options.

In addition to examining the building itself, which is so captivating and breathtaking, that the feeling that ‘time stopped’ in there prevails, you can also feed animals living in enclosures on the territory, ride an elephant, go horseback riding or ride a horse in a carriage, ride a quad bike, or explore the sights from the gondola.

Every day, tourists are shown a traditional Thai show with dancers in colorful national clothes, elements of martial arts, etc. There is a cozy restaurant on site where tourists can enjoy national Thai cuisine. The main thing that has to be taken on this trip is a camera - the photos in here will turn out spectacular. 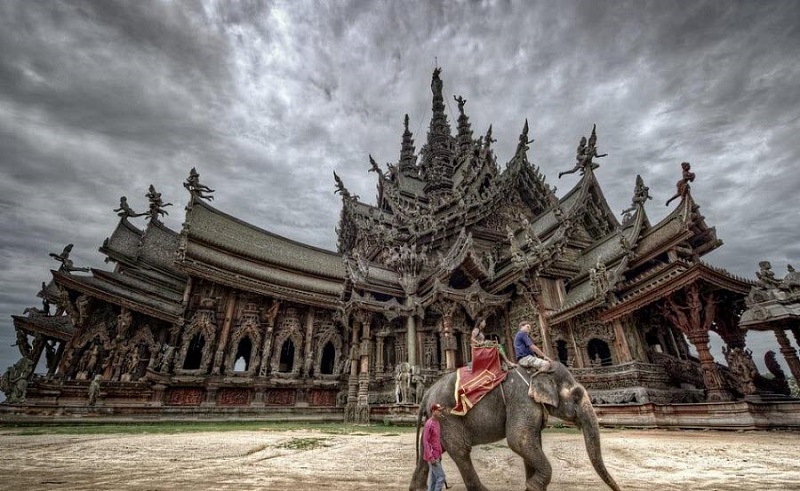 When going on an tour to the Sanctuary of Truth in Pattaya, the Wat Khao Din Temple, Big Buddha Temple or any other religious places, tourists should remember the following:

How to get there

To get to the Sanctuary of Truth in Pattaya, it is possible:

The fastest, and most importantly, the most convenient way to independently get to the Temple of Truth in Pattaya is on a rented car.

Rent a car in Pattaya from MAKS Car Rental will allow tourists to significantly save time and effort, and to visit not only temples, but also remote bounty-style beaches with clear water and white sand, to go to the mountains or to the nature reserve, to the zoo or to the crocodile farm, to the water park, amusement park or the oceanarium.

The opportunity not to depend on tourist or public transportation, which is given by MAKS Car Rental company in Pattaya, will turn your vacation into a comfortable and carefree time, full of emotions.

On the company’s website: https://thai-rent-car.com/ you can select and book a car, make an appointment for a pickup at the airport, etc. For those who did not consider this option in advance, specialists will gladly assist on spot to arrange the car rental.